2020 Treasures from the Vault

The Forsyth is currently closed, but we’ll still be updating our Treasures monthly for you to view online!

Did you know the Forsyth collections include porcelain from the Ming, Yongzheng, and Meji Dynasties and Japanese cloisonné from the 19th century? A wonderful collection of early American furniture, quilts, and pewter? Roseville and Rookwood pottery? In order to share these rarely seen gems, the Forsyth will showcase a monthly pop-up exhibit featuring some of these treasures in the main gallery. 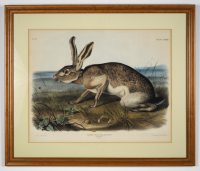 Featured in this print is a Black-Tailed Jackrabbit, which is actually a hare. To learn more about this animal, watch the Treasures video, “The Rabbit & The Chicken.” 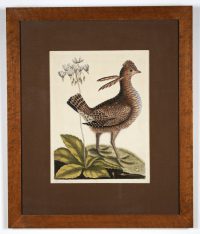 Featured in this print is a Greater Prairie Chicken, which is not really a chicken at all. To learn more about this animal’s unusual mating call and see pictures of it’s plumage, watch the Treasures video, “The Rabbit & The Chicken.” 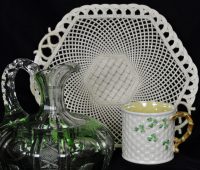 2019 Past Treasures from the Vault 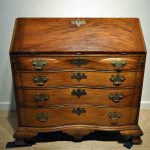 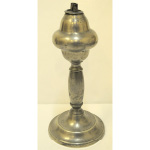 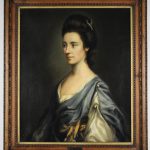 Untitled Portrait of a Woman 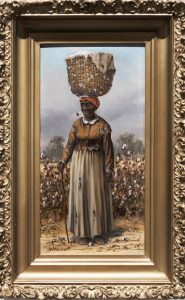 William Aiken Walker came of age in antebellum Charleston, South Carolina, an experience that powerfully informed both his personal life and his extended post-war career. Though little is known about his early artistic training, he was afforded a liberal education in the arts and first exhibited paintings at the 1850 South Carolina Institute Fair.

During the 1880s, he was one of only a few artists to produce genre paintings featuring the lives of African Americans engaged in agrarian labor on post-war Southern plantations. His works were bestsellers at popular tourist attractions of the late 19th century South.

Walker’s paintings reflect a white southerner’s interpretation of the devastated cotton kingdom and its displaced inhabitants. The artist approached his subjects with a sense of nostalgia that was at times both sympathetic and caricatural, creating works that document, in grim detail, the post-war African-American sharecropper’s existence while carefully avoiding any controversial issues that could impact the popularity of his work. 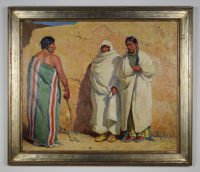 Dance Chief with Slackers is a work by artist Joseph Henry Sharp, who painted portraits and daily life of Native Americans in his Taos, New Mexico, chapel turned full-time art studio. The painting is a work within the Bill and Irma Runyon Art Collection. According to a note in Mr. Runyon’s files, dated Aug. 17, 1974, the figures in the painting were identified by Clara Manting, an employee of Thomas L. Lewis of the Taos Art Galleries, as being from left to right: Teofilo Romero, Manuel Espanolia, and Jerry Maribal. This work inspired an original opera composed exclusively for the Forsyth Galleries by musical composer Nathan Felix. The opera will debut Nov. 15 at the Forsyth’s . 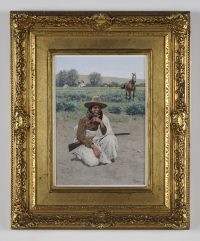 A student of both Munich and Düsseldorf’s schools of fine arts, Henry François Farny was an American painter and illustrator whose work centered on the life of Native Americans in the 19th century. This painting illustrates a Native American man wearing traditional buckskin clothing. A horse, a village, and several teepees (tipis) can be seen in the distance. This work inspired an original opera composed exclusively for the Forsyth Galleries by musical composer Nathan Felix. The opera will debut Nov. 15 at the Forsyth’s . 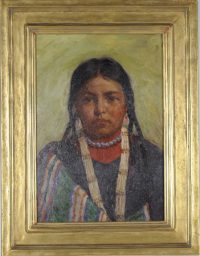 Josephy Henry Sharp was a founding member of the Taos Society of Artists and was considered the group’s “Spiritual Father.” He was known for his portraits of Native Americans, being commissioned by President Theodore Roosevelt to paint the portraits of 200 Native American warriors who survived the Battle of the Little Bighorn. In this portrait, we see a young girl in a colorful cloak and wearing necklace strands made of beads and shell or bone beads. This work inspired an original opera composed exclusively for the Forsyth Galleries by musical composer Nathan Felix. The opera will debut Nov. 15 at the Forsyth’s .

#24 Blacksmith Shop is an oil on canvas by artist Paul Weber Jr. Weber is known for his nostalgic paintings featuring stark western landscapes. In this work, he captures the interior of an open blacksmith shop, complete with the tools of the trade including a lit forge and chimney in the center. Beyond the shop is an arid landscape with what appear to be mountains in the distance.